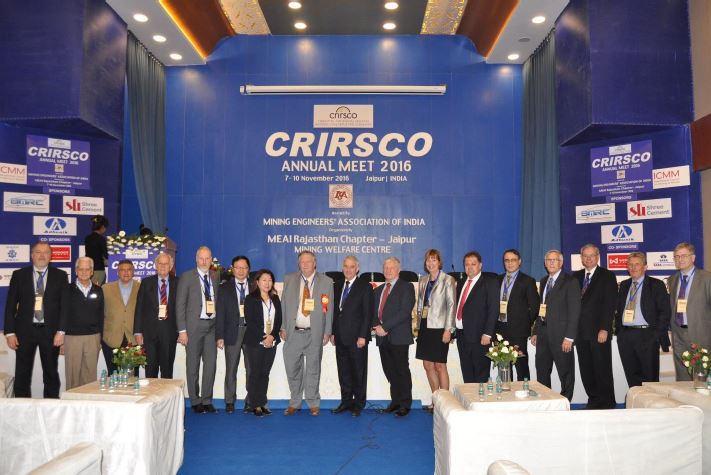 Representatives of Members of CRIRSCO, CRIRSCO Representatives for India, China and Latin America and observers from future prospective members (China, India, Indonesia, and the Philippines) met at Jaipur, India for their annual general meeting on November 7 to 8, 2016.

During seven technical sessions, more than 30 papers were presented by CRIRSCO member countries and professionals from the Indian mineral industry. The presenters discussed critical issues related to the estimation and public reporting of mineral resources and reserves for the mining industry and also the proposed strategy to include India as a member of CRIRSCO. By joining CRIRSCO, the Indian mining industry can benefit by attracting foreign investment through implementing internationally accepted public reporting principles that reinforce transparency, materiality and competency in developing and public reporting of Exploration Results, Mineral Resources and Mineral Reserves in the country.

The members of the National Core Committee (NCC-MEAI) who are responsible for developing the Indian Reporting Code (a CRIRSCO-aligned code) met with the executives and members of CRIRSCO to discuss the progress made so far and a roadmap for the actions necessary to have the Indian Code adopted in the country.

CRIRSCO representatives also met separately with the delegations from China, India, Indonesia and the Philippines to discuss their progress and the next steps for their journey towards membership of CRIRSCO. A memorandum of understanding (MOU) was signed with the Indonesian delegation.

In a special meeting, the delegates from China, who are also developing a CRIRSCO-aligned code, met with the members of NCC-MEAI to further cooperation between India and China in their efforts to develop their respective Codes.